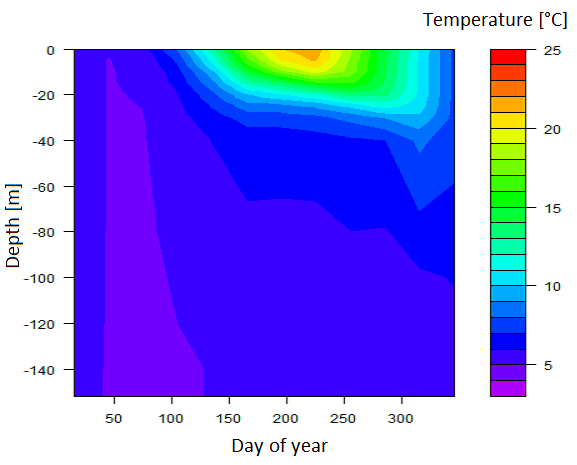 Thermal regime of lakes and rivers

In lakes, the main heat transfers occur at the water surface, which exchanges heat with the air and receives heast from solar radiation. The temperature of lakes surface therefore follows approximately air temperature through the year, although it varies much slower. The heat reaches the deeper layers only progressively, so that the temperature of these layers gets more and more stable with depth.

Typical thermal regime for a low-elevation lake in Switzerland (see plot on the right):
In winter, the lake temperature is rather homogeneous from the bottom to the surface of the lake, usually at 4-6 °C. In spring, the lake surface starts to warm up. As warmer water is less dense, it floats on top of the deeper, colder layers. These deeper layers are then isolated and warm up only slowly, for example when strong wind provokes mixing. In summer, there is usually a warm water layer (>15 °C) down to 10-25 m depth. Below it, the temperature decreases rapidly and, below 30 m, water remains cold (<8°C). In fall, the lake surface cools down, creating mixing with the deeper layers. As a result, a large layer (20-40 m deep) of ~10 °C water can often be observed at the end of the fall. Wind influences much the mixing: strong storms can push this water down to larger depths and contribute to homogenize the lake temperature. If, over the winter, temperature decreases enough so that it is about the same in the whole lake, vertical mixing can occur, whereby water is exchanged through the whole water column, renewing oxygen and nutrients in the deeper layers. This is essential for the lake ecosystem.

The temperature regime of a lake can be strongly altered if this lake is used as a reservoir for hydroelectricity production - especially if water is withdrawn from the bottom of the lake.

The average seasonal temperature profiles of specific Swiss lakes can be visualized here.

Rivers are mainly fed by rain and by the melting of snow and ice. Lowland rivers are usually primarily fed by rain and have a pluvial flow regime. The flowrate responds quickly to precipitation and is therefore high during rainy periods and low during dry periods (typically in the fall). The feeding of the river by groundwater acts as a buffer, as groundwater can store rain for much longer than rivers. Highland rivers are often primarily fed by the melting of snow and ice. The flowrate is then low in winter and increases during spring and summer. The maximum flow rate occurs at the period of the maximum snowmelt in the drainage basin (typically in the spring).

In Switzerland, most rivers have part of all of their source in mountainous regions. Therefore, snowmelt is a key driver of the flowrate. A map of the flow regime of most Swiss rivers can be found here.

Flowrates can deviate from their natural regime for rivers downstream of lakes, especially if the level of these lakes is artificially regulated (e.g., for hydroelectricity production of for flood control).

Close to its source, a river has a temperature mainly determined by this source, which can for example be a mountainous drainage basin, a lake or groundwater. The further from the source, the more the river temperature becomes influenced by air temperature and other drivers.

The yearly average flow and temperature regime of specific Swiss rivers can be visualized here. Current data is made available by the Federal Office for the Environment here.